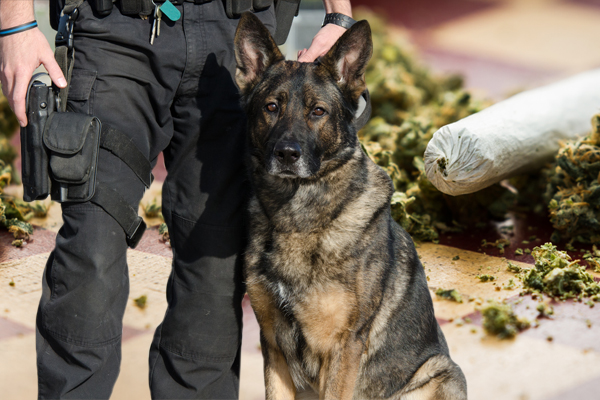 Drug cases can be really complex, and that’s why you really need a proficient Kansas drug lawyer or attorney, to help win your case. Drug traffic stop and search cases may be especially complicated. If you have been arrested for drugs when driving and a drug-sniffing dog was involved, you most likely need to know what rules and regulations officers have to consider.

Right before searching a vehicle, the policeman must absolutely have what is established as probable cause, indicating that their belief that a crime has taken place should be backed by proof. The evidence would be physical, details from witnesses, or the officer’s own observations, but must go further than simple suspicion. In point of fact, the preliminary hearing is pertained to as “probable cause hearing,” and is primarily made to review the proof for any probable cause scenarios.

In these courtroom proceedings, it will be verified if the policeman had probable cause, the opinion that a crime transpired or was occurring, or reasonable suspicion, giving the officer the right to apprehend and inspect the suspect. But truly, neither probable cause nor reasonable suspicion is demanded to call for a drug-sniffing canine to the scene during a routine traffic stop. This was established by the Supreme Court in Illinois v. Caballes, wherein Roy Caballes was pulled over for speeding and afterwards arrested for marijuana trafficking shortly after a drug dog was brought to the scene and alerted on his vehicle.

In a 6-2 ruling, the Court favored the state, with Justice John Paul Stevens writing that drug-sniffing dog searches did not violate Fourth Amendment rights. He felt that the expectation of privacy did not extend to illegal narcotics. For this case, any positive signal may be considered probable cause to execute a search. If the drug dog signals that it smells drugs, the arresting officer then has probable cause to provide a search.

You do, nonetheless, have some proper protection in this scenario; example, an officer cannot detain you indefinitely, or perhaps for an unreasonable period of time while waiting for the drug canine to arrive. Basically speaking, if the arresting police officer can not produce the drug dog to the scene in the time it takes to run your tags and write a ticket, the use of the dog becomes constitutionally suspect.

So if you are pulled over and the policeman makes a threat to call in the K-9 unit, you are not obligated to say yes to searches. While waiting on the canine to appear, you likewise have the right to establish if it is appropriate for you to leave by straightly asking if you are free to go. If the policeman rejects and goes ahead to detain you until the dogs appear, you have the right to remain silent and proceed to choose not to consent to a dog sniff, although the policeman says you should consent.

You should know that opening your car for the police officer or handing over your keys is the same as consent. If a judge decides that the officer had no reason to detain you, any evidence discovered by the drug dog may probably be tossed out in court.

The Reliability of Drug Sniffing Dogs

For literally thousands of years, dogs have been used by human beings for their excellent sense of smell, as their noses contain more than 200 million receptors (as compared to the 10 million humans possess). Several breeds even have the impressive ability to recognize specific scents of objects which are totally immersed in water, which is very vital for law enforcement since drug smugglers commonly try and hide the odor of drugs with some other substance.

This is not to say that a dog’s sense of smell is infallible, and the accuracy and reliability of many drug-sniffing dogs have been brought into question in court. The American Society of Canine Trainers (ASCT) even admits to the surprisingly poor accuracy rates of drug-sniffing dogs, pointing out averages as low as 62 % (Currency Searches, 2015).

There are many reasons and variables for this staggeringly low accuracy rate. At times a trained drug dog’s nose is even too strong, and may lead to the detection of trace scents left behind by drugs which are no longer actually present. It should also be regarded that there is a considerable difference between what a dog can do, versus what a dog actually does. What the dog actually does is almost completely dependent on the training received, for which there are no required national standards for certification. Also, despite how effective or ineffective a dog may really be, it is competent of acting on its own behalf and as a result, it may be almost impossible to ascertain the motivation for any particular response.

Certainly we would like to believe that these animals are selfless and devoted to satisfying their handlers, yet that in itself could be problematic. Dog handlers can accidentally cue alerts from their dogs by leading them too slowly or too many times around a vehicle.

Never assume that just because police are in a position of power, they are always right. If you feel you were subjected to an illegal drug search, you deserve to have the issue looked into by a professional Kansas drug lawyer.